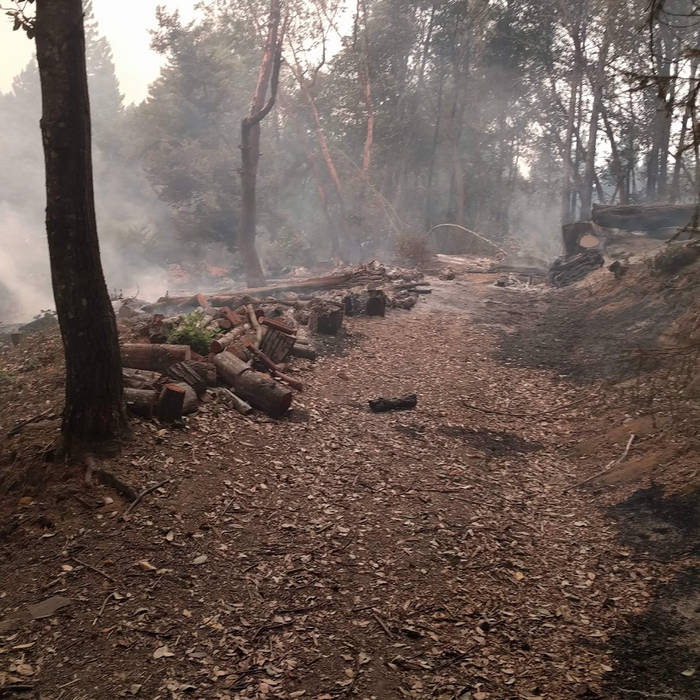 This is the last album recorded at "The Shed" in Bonny Doon, CA, before the great Bonny Doon fire of 2020 tore through the area. The shed was burned to the ground on Wednesday, August 19. The shed had originally been a pirate radio folk station tower. It had so many electrical outlets I never needed a power bar or anything. It was a great place I will dearly miss. I will even miss tip toe'ing around so the neighbor dogs who hated me wouldn't flip out and bark like crazy, often ruining some of my quieter sessions. Some sessions the dogs are barking but I turned the mics way down and played really hard.

Not this album, though, I chose some songs, mostly from 1993-1995 that I hadn't recorded yet. This was the last session I did, where on Tuesday, August 18 around 7 p.m. I was boiling hot in the house (no air conditioning and the swamp cooler was on but ineffective). I thought to myself I hadn't made an album with a classical guitar (a Yamaha G-231 I bought for $100 bucks) for a long time. I used to play classical guitar as my main acoustic back in 2000 and "Life Without Home" was the last album I played classical predominantly on. It's a cool sound, even with a pick, and it let's the vocals stand out. My voice lately has been pretty shot for whatever reason, but I recall thinking I'd lay some bed tracks down and go back and redo vocals later. Then I laid down drums and then bass tracks. It went pretty fast, because I've been playing all these songs for over 25 years and even the drums and bass I had never played on these songs before but I had the feel in my head already. It was a fun session. I particularly enjoyed how "Nothing's Worth Believing" turned out, because it's been my passion to play bass and drums almost as if I'm two different people playing off each other. I play around with time and see it as an Art-form, vs, just me doing an overdub. It's really hard to get right, and on that song especially I nailed it. (The best bands play with time when they play together.) All the tracks were recorded pretty fast. I did the bass tracks all in one sitting, one take for pretty much each song. When I ran off a preliminary mix of one song, I was reminded of one of my favorite Bob Dylan albums, "John Wesley Harding", where there's a sparseness to the vocal, harmonica, bass, drums and guitar. It sounded done to me, even though I know I could add an untold amount of instruments and colors to it, if I waited until November. All my other instruments were already in storage. It was an interesting sounding recording as it was, so I figured I'd mix it the next day.

Around 10:30 I was ready to end the session. It was too hot in the shed and my guitar was literally sweating. I had two more songs I could record to make it 11 songs and 9 was too short. The crickets were singing really loud outside and the studio was so hot I did something I never did when recording (mostly because I was afraid of the dogs starting to bark if they heard me). I opened the studio door of the shed and on the last two songs you can hear those Bonny Doon crickets sing their last songs harmonizing along with me.

I didn't think anything of it. Every summer I pack up most of my gear and put it in friends houses in storage because of how hot and dry it gets. I figured it'd be another three months before I'd record a full fledged album again, when the rains came in November, and the return of humidity and fog and cooler temperatures. I was used to paring down for those few months to only one guitar and most of the time I'd be on tour anyway with Laurel.

Most of the albums I recorded were in the winters in Bonny Doon. I only made a few in the summer between tours. I was bummed that because of the pandemic, here I am putting all my stuff in storage after a rare lightning storm prompted me to on the previous Saturday night. I couldn't sleep that night and at the crack of dawn I was calling my friends in Santa Cruz and Aptos to go bring them my stuff, which they kindly obliged.

That night on Tuesday, August 18, was so hot in the shed I said the crickets would sing with me and they did. They are in full voice behind the last two songs I recorded there.

These songs are presented in the order they were recorded in. There's some imperfections, as I was planning to re-cut the vocals. The mix might be good or it may not be, my Technics floor speakers and Sansui Power amp I used to mix albums since I got them back in 2003 burned in the fire, so I had to use headphones to mix it.

One thing that strikes me about this album in hindsight. The fire came through about 24 hours after the last note was recorded here, and there are so many songs on this album that reference disaster or fire, without even knowing it, I had naturally recorded the Shed's swansong album and possibly a farewell to Bonny Doon, a beautiful place I lived for 5 years. The last words that I recorded in this studio were "I've got the same soul, waiting on a feeling, ready for the fire, ready for rekindling". Crazy.

This album is dedicated to all the amazing people I know in Bonny Doon, and the amazing memories I made here with them. There are so many of them who lost their homes in the past few days. There is a lot of sadness and desperation in the air. I hope that this music can help everyone affected by this in some way.

I hope you enjoy this album. It may be quite some time before I have a recording studio space to do my thing in again. Please wish me the same good fortune I had to find this shed in the first place. Everything from "Praying For The World" in 2015 to 33 albums later was recorded here. Special thanks goes out to Rachel Goodman and Steve Coulter and Don Mussell. If it weren't for you guys none of these albums probably would exist and they'd all be ringing in my head instead.

All songs written by Dan Frechette
All songs copyright 2020 and registered with SOCAN.